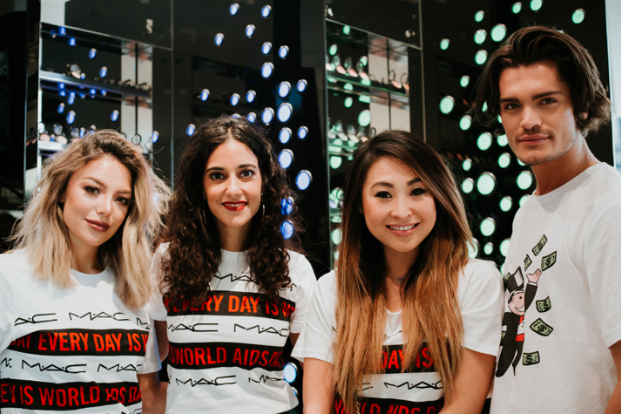 This December 1st we partnered with the Mac AIDS Fund to raise awareness around the fact that – 30 years on – the HIV epidemic is still present among us. Vulnerable populations such as adolescents are still denied the most basic health services and opportunity to stand up for themselves. Despite the progress that has been made, with 21 million HIV positive individuals receiving antiretroviral therapy to date – the success stories mask the challenges that persist.

From central Amsterdam to Moscow – On World AIDS Day this December 1st, Dance4Life and MAC Aids Fund raised awareness around unsafe sex, HIV and AIDS. MAC Cosmetics’ VIVA Glam lipstick took center stage at our Amsterdam event, where 100% of the process went to the MAC AIDS Fund. And last week in Moscow, we partnered with MAC to pair up girls and women with HIV+ with local makeup artists, to address the stigma of living with HIV. A popular music artist also joined the MAC AIDS campaign in a mall where HIV testing was made available.

Our work with the MAC AIDS Fund has seen us embark on important projects in the last five years. The funds awarded to Dance4Life by the organization have empowered and educated young people to become active among their peers and given sexuality education to young people in over five countries. This December, we decided to look back on some of the work we have achieved thanks to this great partnership and donor. Read more below.

Dance4Life and the MAC AIDS Fund

Dance4Life Argentina has benefitted from MAC AIDS funding and allowed us to reach 1.300 young people and educate them on their sexual health, HIV/AIDS, and teen pregnancy. This work has been undertaken through our partner Fundacion Huesped. Additionally, a National Youth for Health network has been set up which has seen adolescents develop advocacy skills and raise their voice on a local and national level, after embarking on our youth trainings.

Dance4Life Mexico has been active in Mexico-City and Monterrey via our partner Mexfam, since 2007. With the support of the MAC AIDS Fund, we have been able to expand our youth trainings to two regions in urgent need of quality sexuality education. As a result, 4.000 young in Guerrero and Michoacán received comprehensive sexuality education and improved their skills and knowledge.

Dance4Life Russia has received funding via our partner FOCUS-Media Foundation for a project geared at strengthening networks supporting women who are HIV positive. In late 2016, Dance4Life also received direct funding from the MAC AIDS Fund. To date, our programmes in Russia have reached over 250,000 young people across 14 regions.