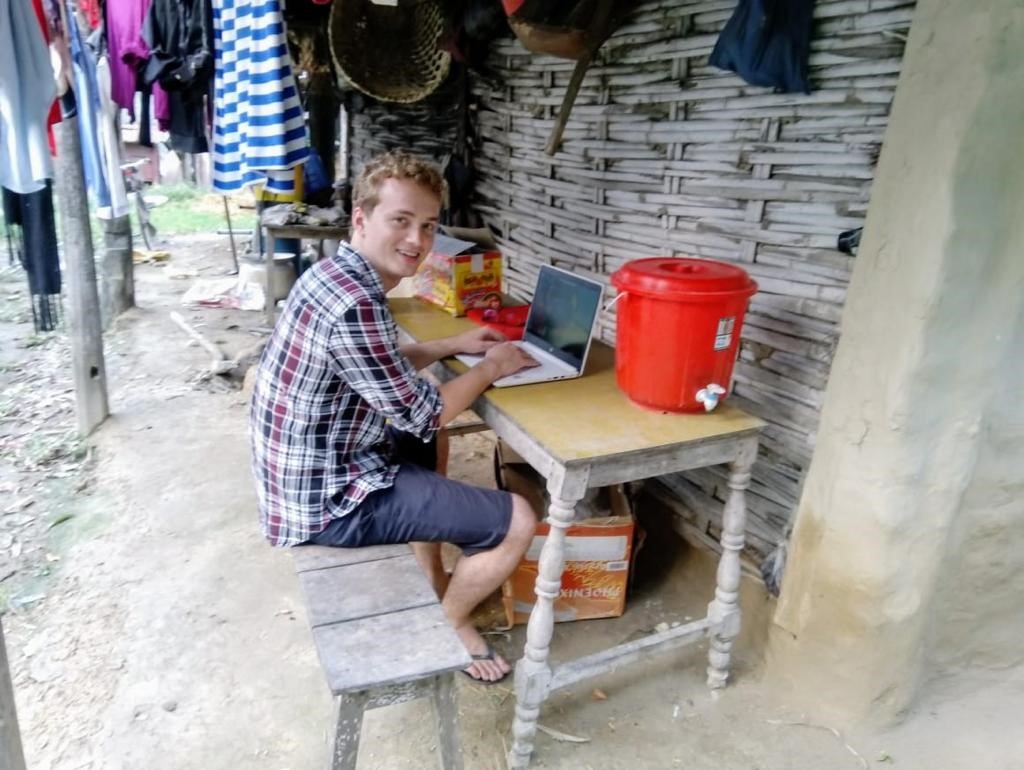 Dirk Naaijkens is a student in International Development Studies at Wageningen University & Research.
Today he presents his Master thesis: ‘‘You have to think about your future life!’’

For his Master thesis, he conducted research in eastern Nepal into the experiences of young people as a result of their participation in the Dance4Life Empowerment Model.
His Participatory Action Research (PAR) shows that Nepali youth exposed to the Journey4Life curriculum took action to stop child marriage in the community and to decrease girls’ discrimination during menstruation.

He wrote a blog for Dance4Life about his amazing experience.

Breaking the ice
I’m in an empty classroom. An hour by bike from my new residence Prakashpur, I am at a secondary school to talk with students. The atmosphere is somewhat ill-at-ease; they are shy and initially avoid eye contact. So, I try to break the ice and tell something about myself and I show a picture of my girlfriend. Bibek, my local contact person and translator immediately told me that this is not custom in Nepali culture. I was afraid I made a huge anthropological mistake and offended everyone there. However, the opposite situation unfolded. ‘’Wow! She girlfriend? Which cast? She beauty!’’ And the ice was broken.
Thanks to the presence of Bibek, one of the peer facilitators in that school two years ago, the students felt safe and familiar. They talked very easily after some time and didn’t seem nervous or shy. Sensitive issues such as child marriages and menstruation were explained by the students with personal stories, they were not awkward at all and were actually very frank.

Challenging the memory
At the beginning of the focus group discussion, I asked the students to write down three things that come up in their minds when they think back on the Journey4Life, the sexuality education curriculum delivered as part of the Empowerment Model. Talking was not allowed, and I saw the students actively thinking and writing, through which everyone could write down concrete things they remembered of the project from two years ago. They had the choice to write in English or Nepali, whatever they felt was best for them. Most wrote down dancing/music, Dance4Life, child marriage, pictures and/or Sexual and Reproductive Health and Rights (SRHR). Shirisha*, fourteen years old, gave an example: ‘’In our culture, when menstruation is starting, four days completely like a untouchable cast; same condition. And in the community, they are explaining about awareness about that, but it’s not completely gone… In my house, for me, it is changed, because I talked to my parents.’’

Preventing child marriage
The name ‘‘Agent4Change’’, that Dance4Life gives to the young people who undergo the Journey4Life, seems to be more than just a catchy branded phrase; the students say that they actively discuss topics as child marriage, safe sex and SRHR, and menstruation in their own community. Foremost, child marriage seems to be a problem for young girls: they are the ones ending up pregnant in the homes and not being able to finish their education. Students say they talk to teachers or the parents when they see child marriage happening, or call the police if this does not work out. There is also the Child Helpline Number that can be called throughout Nepal: 10-9-8. ‘‘After this program, no more child marriage! If anywhere a child marriage is taking place, the ‘’Child Helpline Empowerment 10-9-8’’ will be called,’’ Shirisha fanatically bellowed.

*names has been modified to protect the girl’s identity